Ilayapathi Vijay upcoming film Bairavaa first look teaser trailer is all set to release today. Vijay previous movie Theri was a blockbuster hit and there is a lot of expectations on his project. Vijay will be seen in a different look under the direction of Bharathan. The Bairavaa movie is going to be released by Vijaya Productions. Keerthy Suresh has been roped for the leading female role to act opposite Vijay in Bairavaa movie. Tollywood actor Jagapathi Babu will be seen in an important role in the movie. The movie is at the final stages of its shooting. So the filmmakers have decided to release Bairavaa Movie First look Teaser Trailer. 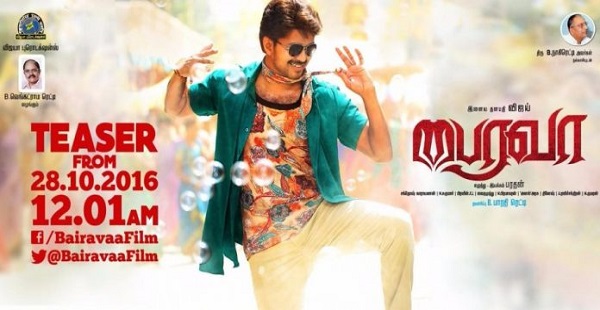 Recently Bairavaa Movie stills have been released by the filmmakers on social media platform. From the movie stills, it can be seen that Ilayapathi Vijay has donned a new look for the film. As per the trusted Tamil film sources, actor Vijay will be seen in a double role and he will be seen in both  antagonist and protagonist roles in the movie. Earlier this movie was titled as Vijay 60 and Thalapathy 60 as it was the 60th movie in his film career. Now the movie title has changed to Bairavaa.

Keerthy Suresh, recent movies Remo and Thodari were blockbuster hits and her movie unit is hoping her luck continues and Bairavaa will make hattrick hit in her career. Actress Aparna Vinod is also been roped for second led female role in the movie. The filmmakers have officially announced that Vijay Bairavaa Movie First look Teaser Trailer will be releasing 28th October 2016 at 12.01 AM