Konidela Kalyan Babu Aka Pawan Kalyan readily accepted the invitation of his Nephew Ram Charan Teja. The news on the presence of Pawan Kalyan for Dhruva Audio Launch Function is finally announced by Ram Charan Teja. A long pending desire has been fulfilled with the presence of Pawan Kalyan, younger brother of actor turned politician Chiranjeevi. Megastar Chiranjeevi, elder brother also registered his presence at the audio launch Sardaar Gabbar Singh, starring Pawan. But Pawan is famous for his unwillingness to appear in public meetings and functions. the reason is that he has pending projects in his kitty and busy schedule. 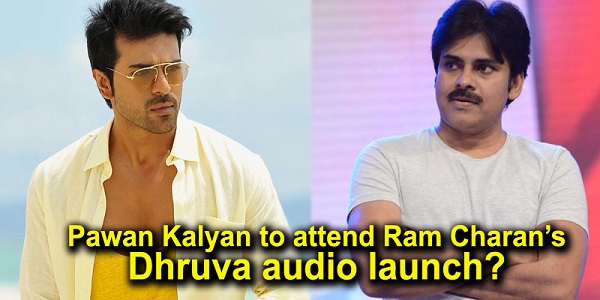 Finally, the power star is going to surprise his fans and film industry by arriving at audio launch in Hyderabad on November 20. Dhruva first look poster and teaser recently released by the filmmaker has gained lots of appreciation and love by fans. Surprisingly Dhruva teaser crossed viewership of more than 3.5 million. This new movie Dhruva, starring Ram Charan opposite Rakul Preet Singh is going to hit many screens this year on 2nd December 2016. Promotion activities are going on in a full  swing to make the movie big hit.

The upcoming movie featuring Ram Charan in the main role is the official remake of Tamil movie Thani Oruvan ( 2015). Thani  Jayam Ravi played the lead role in Oruvan. This year Ram Charan Bruce Lee is a hit but it does garner many audiences. In this impending Dhruva movie, Ram Charan can be seen imitating the role of a powerful police officer. Prior to its release movie has gained many viewers and fans, who are impatiently waiting to witness this action power movie in big screens. One of finest actor of Telugu cinema, Aravind Swamy is going to make a comeback after the long period of time by playing the role of a villain. Fans are waiting to see the Ram Charan and Pawan Kalyan at the Dhruva audio launch from the time of his announcement to poster release.