Kahaani 2 is expected to release this year on December 2. Meanwhile, Vidya Balan has released the new poster of Kahaani 2 movie on her twitter handle. In the poster, it shows the actress Vidya Balan as a mother holding her daughter close to her heart. Recently, The teaser poster of Kahaani 2 is also released by the movie unit in which Vidya Balan can be seen in a totally de-glamorous role. The poster flares up on Vidya’s Twitter and Instagram accounts create hype in whole media and Film Industry. 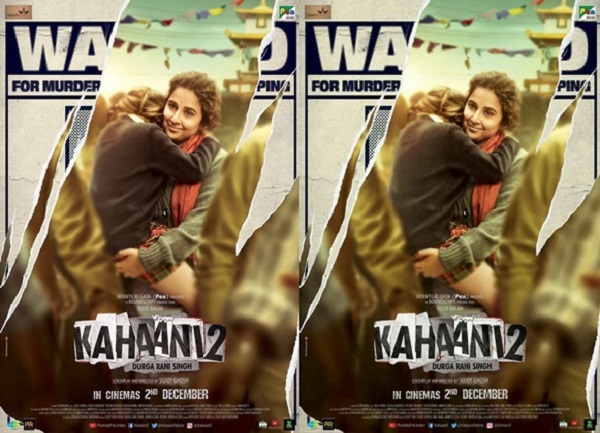 In the movie, Bidya Balan will be portraying the role of a fugitive, who is charged with kidnapping and murder. Vidya plays the character of a wanted criminal Durga Rani Singh in Kahaani 2. The trailer of the film is released on October 25. This upcoming movie is a sequel of previously released movie Kahaani (2012). Both the film Kahaani 2 and Kahaani features Vidya Balan in a lead role.

Both the teaser and new poster of Kahaani 2 conceal a mystery of the identity of a lead performer. Wanted: Kahaani 2’s Durga Rani Singh’, the tag line of the teaser poster is defining the super intelligence of Director Sujoy Ghosh of unfolding the story of Durga Rani Singh. There is a little twist in a tale of casting Arjun Rampal in a lead role opposite Vidya Balan.

Last year release of Vidya Balan Hamari Adhuri Kahani, opposite Emraan Hashmi was not able to impress the fans. She also made the guest appearance in this year in Te3n. In this upcoming film, viewers will be lightened to see an actress in all new form.