Young Hero Karthi Upcoming film Kaashmora Official Teaser Trailer has been released. The First Look Poster Of the film was released on 18th August. In Kashmora First Look, Karthi looks stunningly dashing in an avatar of the warrior. Gokul is directing Kaashmora Film, who himself has written the story. This flick is being delivered by SR Prakashbabu and SR Prabhu under the Dream Warrior Pictures Banner. So are you eager to check this Supernatural Horror Film Kashmora Official Teaser Trailer. Here we bring you to lessen your anxiety.

This Multi-Genre film is a power-packed movie with elements of Period Drama, Horror, Comedy, Action. The film features Nayantara and Sri Divya in the female lead characters. The other cast includes Manisha Yadav, Vivek, Siddharth Vipin and Jangiri Madhumitha. Santhosh Narayanan is composing the music. VJ Sabu Joseph is altering the editing work while Cinematography is taken care by Om Prakash.

Karthi starrer Kashmora film is touted to be Horror Supernatural film in which Nayanthara and Sri Divya paired opposite the actor to share screen space. The earlier released First Look Poster was brilliant with Karthi Aggressive Looks. Now the filmmakers are to release Kashmora HD Teaser to reduce the audience enthusiasm.

The shooting has been initiated on January 2016 and has wrapped recently. The much anticipated Karthi and Gokul joint effort are on its way to entertain the audience on the silver screen soon. As of now makers are working rigorously to complete post-production work. Meanwhile, they have released Kashmora Trailer. So watch out the trailer and wait for the film’s release. 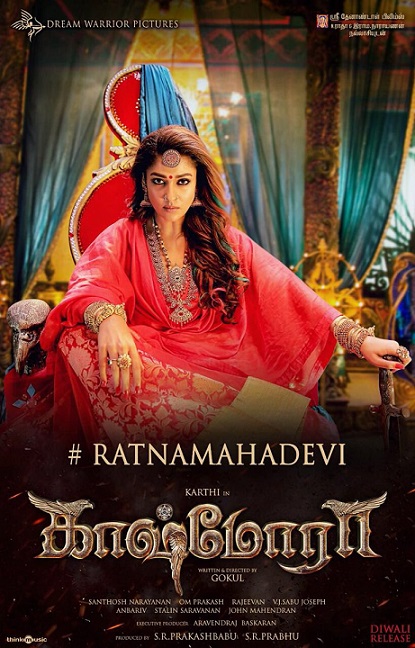 Nayanthara is recently seen in Babu Bangaram (Telugu) and Inkokkadu (Tamil Dubbing). Apart from this now her next movie Kashmora is getting ready to entertain the audience. Before announcing the release date the film unit has released Kashmora Movie HD Teaser Trailer. As per source film may get released on the eve of Diwali.