Mirzya is a remarkable compilation of a tragic romantic love story of Mirza Khan and Sahiba based in Punjab. There is no doubt that this year is an exciting year for the Bollywood movie lovers. Mainly for those who are the fans of epic romantic and controversial Love stories. This forthcoming movie based on love tale of Mirza Sahiban, hitting the screens on October 7, 2016. 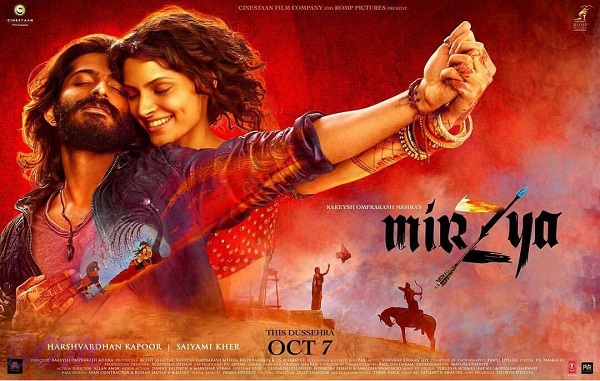 Mirzya is considered to be the first romantic love story of Rakeysh Omprakash. He wanted to shoot the film in locations Suitable to emote story of the movie. He had extensive research to Search undiscovered regions of Rajasthan and also Ladakh, in his last movie Milkha Bhaag. He has also captured Ladakh and this time again he went back to capture the scenic beauty Ladakh for narrating the tale of Mirzya.

The music of the movie is already gathering many audiences. because of its uniqueness and experimental composition it has created lots Of fan following. In Rang De Basanti (2006) and Delhi 6 (2009) director has opted for the magical music of Rahman but he changed his vision for his last movie Bhaag Milkha Bhaag by selecting Shankar-Ehsaan-Loy for Mirzya too.

Rakeysh Omprakash Mehra’s ‘Mirzya’ trailer is already out Signifying a love triangle story. As per the trailer quoting the actress Saiyami Kher can be seen tying the knot to another boy. Later on, it shows that she runs away with Harshvardhan Kapoor on her wedding. People are waiting to witness the way the director narrated has the story and solved queries such as, ‘why did Sahiban break the arrows and betray Mirza?’ Mirza dies with that question in his eyes: if she loved him so much, why did she let him get killed?

The audience highly appreciated Triangle twist in the movie. People are waiting to see the acting skills Anil Kapoor’s son and Saiyami Kher. Conventionally the trailer and music of the movie Have already received the overwhelming response. Mysterious type of story of “high fantasy,” as well as the historic The Past makes the movie very enjoyable. One part is depicting mysterious of old times and other is the modern approach. Read Mirzya Movie Review On timesalert.com