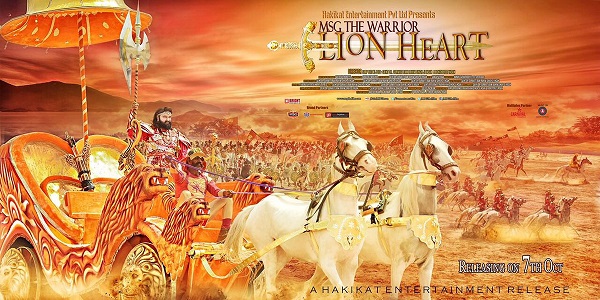 On October 7, and during the first week many films of approximately 15 languages are going to release including the latest Talked movie Mirzya and the Hollywood titles Queen of Katwe and The Girl on the Train, the MSG The Warrior – Lion Heart. Godman Gurmeet Ram Rahim Singh is now heading with his third instalment The Messenger, MSG: The Warrior – Lion Heart which is releasing in Hindi, Tamil, Telugu, Malayalam and English languages. The first and second MSG The Messenger and MSG 2: published in the same year 2015 by Gurmeet Ram Rahim Singh’s company, Hakikat Entertainment itself. Both these movie are big hits in the golden history of the head of the Dera Sacha Sauda cult.

A lot of curiosity based on the trailer itself of latest MSG The Warrior – Lion Heart has been raised. Followers of Godman are The big fan of his acting skills, versatility and role. In the prior MSG films, God-man played the role of a social and spiritual A reformer who is trying to make world free of evil social issues. In the first two, versions Guruji could be seen wearing that Shimmery, glittery clothes, riding bikes, kicking butts, and what not. He had done all that take to make a movie a big hit and had Left no stone unturned. From the acting screenplay, direction, choreography he outshines in all the fields. in his upcoming movie MSG: The Warrior – Lion Heart Viewers can see a significant changeS in his looks. Now he has all new haircut and also Unlimited powers to fight against evil power. The planning plotting of movie is running from olden day times to modern times. Guruji seems to be uprising as a secret agent short version of Hollywood actor. This film has all in his kitty from actions, stunts, visual effects, romance, music, etc. all for pulling the audience and his million followers. Watch the MSG The Warrior Lion Heart Movie public talk on this page.

Promotional activities are also going a full swing, a promotional campaign organised in Sirsa, Saint Dr MSG, The Rockstar Saint made spectacular grand entry as the Warrior from the Movie MSG The Warrior Lion Heart the second from the movie has been released many fans along with media reporters have attended this concert. This show was broadcast live on Facebook & Around 2.75 lac people watched it in just 20 mins. Before its release films have already broken many prestigious records. Talking about Guinness World Record, around 1.5 Lac Oil lightened by the Rockstar fans. This, in turn, breaks the record of lighting 21075 lamps. Another record Saint Dr MSG organised cleanliness drive in Panipat for the selfless volunteers also breaks Limca world record. MSG The Warrior Lion Heart Review public talk Surprisingly Saint Dr Gurmeet Ram Rahim Singh Ji Insan has made an outstanding contribution in all the divisions and segments in making of his film MSG The Warrior Lion Heart, a scriptwriter from creative director, sound designer, scriptwriter, Music Director, Casting Director a total of 30 sections. Undoubtedly it will be a retreat for all the millions of fans of Dr Gurmeet Ram Rahim Singh Ji is meeting the expectations in the form of real change. The stone of fiction and nonfiction uncleared long ago, of course, but viewers in the new movie of GODMAN, MSG The Warrior Lion Heart will see a lot more.