One of the most awaited flick of the next year in Tollywood is Rajinikanth 2.0 film. The movie unit had recently released 2.0 film first look poster on November 20th, 2016. The 2.0 movie first look poster has created a huge craze in the Rajinikanth fans. The film 2.0 is a descendant to the movie Robo which hit the theaters in the year 2010. It is a big blockbuster, and this movie is directed and written by S.Shankar. Now 2.0 film is also directed by S.Shankar and written by B. Jeyamohan.

The movie successor to 2.0 is Robo, where the lead roles are Rajinikanth, Aishwarya Roy. Now in this 2.0 film we see Super Star Rajinikanth, Akshay Kumar and Amy Jackson in lead roles. Besides them, we also see Sudhanshu Pandey, Adil Hussain, and Kalabhavan Shajohnin on the screen in some unique characters. Coming to the music and background score it is carried out by Oscar winner A.R. Rahman. Anthony does editing. The cinematography is performed well by Nirav Shah. T. Muthuraj is handling production designing.

The movie 2.0 is planning to be released in three languages that are in Tamil, Telugu, and Hindi. Simultaneously the production is done in three languages. Coming to production part, founder of Lyca Productions Subaskaran Allirajah is the producer for the Rajinikanth 2.0 film. Movie team is not yet all compromising about the budget, and this 2.0 film is moving on with a huge budget of Rs 350 Crores. Director Shanker had recently tweeted on his Twitter account saying that they had completed 2/3rd of the film in 150 days.

Finally, the makers of Rajinikanth 2.0 film have released the first look poster. Rajinikanth 2.0 film first look poster is eleased on November 20th, 2016. Coming to the teaser, the team is planning to release it for Sankranti as a gift for Rajinikanth fans. Apart from this, the movie makers also stated that the film is going to hit the theaters in October 2017. Rajinikanth fans are eagerly waiting for the sequel of Robo. First, part Robo had successfully run the box office and expecting the same fort second part that is 2.0. 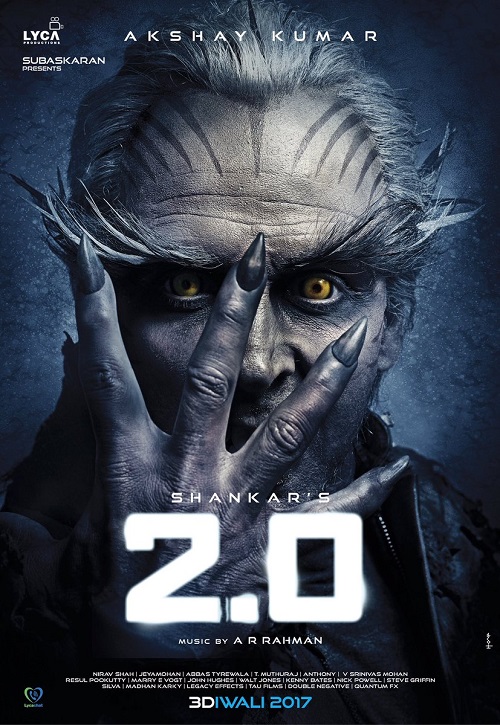 In the film 2.0, we see Akshay Kumar in a unique role. We see him in a different scientific look that is as an antagonist, but there is no information about Rajinikanth look in 2.0.