Samantha is one of the famous Indian actresses. She started her career in Telugu film industry in 2010 with the movie titled Ye Maaya Chesave. Later she also started acting in Tamil movies. Till now she was awarded three film fare awards.

Apart from acting she was well known for her social service. Samantha started her own NGO, Prathyusha Support in 2012. Prathyusha Support is the place where they provide medical services for both children and women. She started Prathyusha Support with three doctors who are friends of Samantha. Being a celebrity she donates some amount of money from events like inaugurations, product launches, and endorsements to buttress the foundation.

Later she raised awareness programmes for their foundation in 2013 of August. In 2014 she also organised trips to Taj Mahal in an aeroplane for the children who are suffering from various diseases. She also provided them the chance to meet their favourite actors. Samantha also intricates in various awareness programs like Haemophilia.

By 2015 Samantha has signed an agreement to pay some amount of hospital bill of one patient in a week and the rest is paid by Andhra hospitals and their parents. Later in November 2015 she also agreed for the agreement of providing vaccine of all the children up to six months for rotaviral infection.

Apart from all those mentioned above she also organised blood camps and held many awareness programs. With the sat ‘we make a living by what we get but we make a life by what we give’ Prathyusha Support has powered an opportunity to act or to take charges against the children who are suffering from life disease. Prathyusha Support makes their last days filled with full of memories.

In 2015 Samantha’s Prathyusha Support was awarded as Best NGO with Nari Niyogin Award. We all must be proud of Samantha for being a great social worker and she stands beside by giving much support to the people.

Samantha helping the poor child who lost her leg in an accident. This shows her kind heart towards needy. 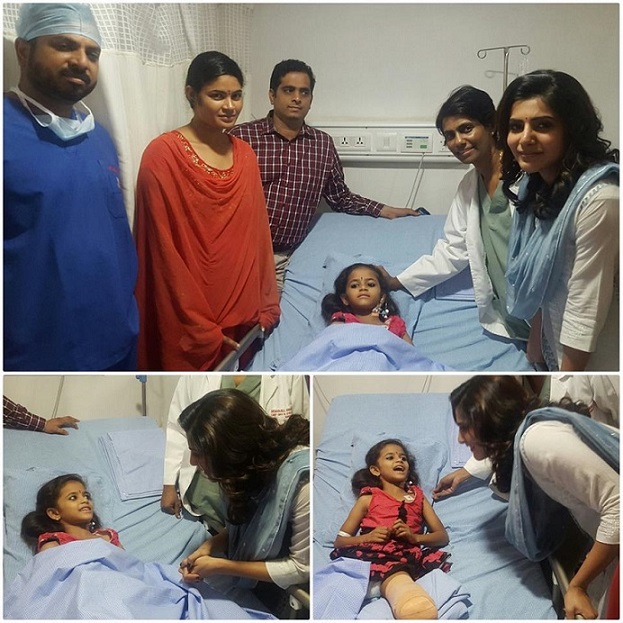