Tamanna Simhadri a transwoman who recently entered the Bigg Boss Telugu Season 3 via wild card entry. It is a bigger surprise to all the audience and housemates. In the first week of Bigg Boss House, the senior actress Hema got eliminated. The host Nagarjuna then introduced a new housemate Tamanna Simhadri into the house. Hope she gives her best in the house and entertains all the viewers. She is also the first transgender person to enter as a contestant in Bigg Boss House and elections of Andhra Pradesh. So to know more other facts like Tamanna Simhadri Biography, wiki, Images, family, and age can read the below article.

Tamanna Simhadri actual name is Simhadri Mastan. She is from Krishna District, a village called Avanigadda. She likes to spend her time in their home town as she likes it very much. Though she was born in a village, she has raised in Vijayawada city. Tamanna was born in 1985. Her education details like she completed her schoolings from home. Later she did her PUC which is equivalent to Intermediate in Andhra University and her degree in Bachelor Of Computer Applications from Indira Gandhi Open University. Bigg Boss Telugu Vote. 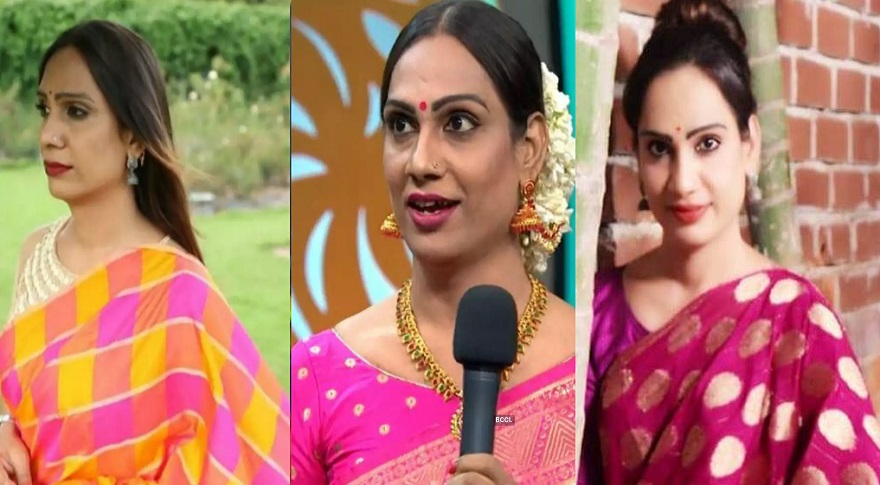 Since from her childhood she desired to become an actress and a model. So she moved to Mumbai with the help of her friend. She then has worked in NGO for the welfare of Women. In the year 2010, she won her first beauty pageant award as a Miss Transgender Mumbai. After a few years that is in 2019, she moved to her home town Vijayawada and participated in AP Elections from Mangalagiri constituency. Before that, she in 2014 also gave massive support to Pawan Kalyan for Jana Sena Party. Apart from this, she also started a foundation, Triveni Social Service Organisation where women and Transgender are supported.

Tamanna belongs to a Hindu family, and they use to live four members in her house. One is her father, Simhadri Nageswara Rao who is a farmer and her mother a homemaker whose name is Nirmala. She has one elder brother who had stopped talking now due to some issues. However, she got separated from her family and moved to Mumbai and changed her religion to Islami.

Tamanna Simhadri is a massive fan of Megastar Chiranjeevi, and her life ambition is to share a stage and shake a leg with him on the screen. An actress, she likes Ramba and the actor Udaykiran is her first crush. Though she is interested in enacting in films, she did not grab any opportunity, if so stated that she will prove herself.

Tamanna Simhadri is now going to see in Bigg Boss 3 Telugu in the next episodes. People who like her performance can vote her through Bigg Boss Vote Via Hotstar or by clicking here.

Some Unknown Facts About Tamanna Simhadri

For other entertainment updates and biographies check Timesalert and know more.