Fathima Babu is one of the most beautiful Tamil and Malayalam actress. She also worked as a news reader for Doordarshan in Tamil version named DD Podhigai. She is the first contestant who entered Bigg Boss Tamil season 3 in 2019. This show is hosted by popular Tamil actor Ulaga Nayagan Kamal Haasan. Hope this show gives her more popularity than other shows and movies she worked earlier. To know more about her personal information like profile, height, weight and more are listed below. 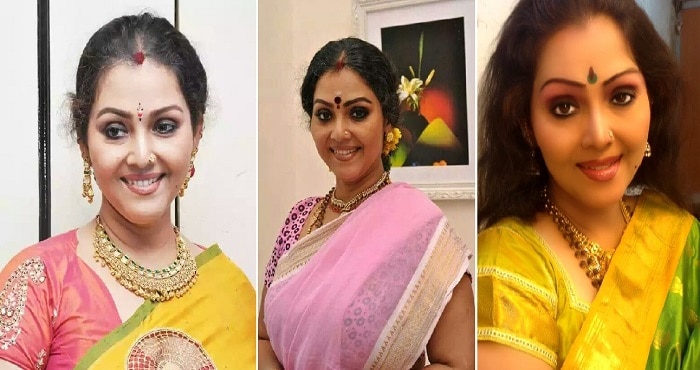 Fathima Babu an actress born on 6th August 1968 in Puducherry. Now she is 51 years old. She was born to a Malayalam family. Also, she belongs to the Hindu region and later turned into Muslim. As an actress, she did her first debut with the movie Kalki where we see Rahman as a lead actor. Fathima is well known and popular as a news reader in Doordarshan and Jaya Tv.

She is 60 Kg in weight and her height is 5 feet 4 inches. That is Fathima Babu Height is 162 Centimeters and 1.62 in Meters. Her hair and eye color both are in black. Her body measurements are 36-26-36 in inches. Fathima had her graduation from Bharathidasan Government College For Women in Puducherry. She had a degree in journalism. She was born in Puducherry and are presently living in Chennai, Tamilnadu. Also, read about one more Bigg Boss Tamil Season 3 Contestant Reshma Pasupuleti.

Fathima got married and her husband name is Babu. She has a daughter named Aashiq.

Some Facts About Fathima Babu

For more details and other updates check Timesalert.