Manjima Mohan Biography – Manjima Mohan is an Indian film actress. She appears in Malayalam, Telugu, and Tamil movies. Manjima Mohan biography available here. Also, you can check Manjima Mohan age, height, wiki details on our page. She was born in Thiruvananthapuram of Kerala state on 11th March 1993 (age 24). Manjima Mohan height is height is 5 feet 3 inches. With respect to centimeters, her height is 160 cm (1.60 meters) while her weight is 56 kgs. Here are the details of her family. Her parents are Vipin Mohan who is a cinematographer and Kalamandalam Girija who is a dancer. 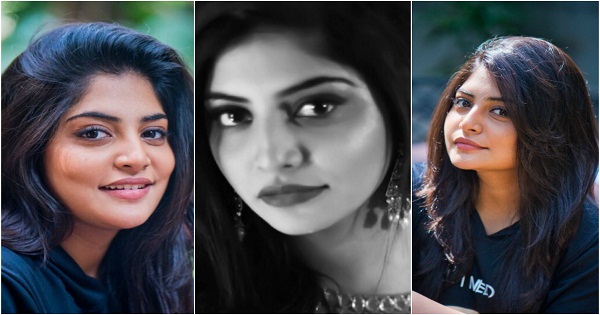 She completed her schooling from Nirmala Bhavan Higher Secondary School. Then, she studied B.Sc in Mathematics from Stella Maris College. She is not new to the film industry as she worked for several Malayalam films as a child artist. Manjima Mohan child artist movies are Kaliyoonjal, Mayilpeelikkavu, Saaphalyam, Priyam, Thenkasipattanam, Thandavam, Madhuranombarakattu, and also Sundara Purushan. Further, She received Kerala state award as the best child artist. Also, Oru Vadakkan Selfie is the first movie for Manjima Mohan as a female lead opposite to Nivin Pauly.