Anitha Sampath is a very well-known NewsReader who works for the main news channel of Sun TV, which is a 24 hour Tamil satellite news channel. She is also famous for being a voice artist, her movie appearances, and as an Internet personality.

Recently Anitha joined the bandwagon of celebrities joining YouTube and she has also started her own channel called AnithaSampathVlogs. She posts videos on there regularly about several different things such as Lifestyle, Fashion, and Makeup related content for her fans. Her channel has amassed over 200 thousand subscribers in a relatively short period of time.

Anitha was born on 12 June 1992. She has always been a native resident of Chennai, where she currently lives and works also. Anitha completed the first half of her schooling from Velankanni Matric Higher Secondary school.

She then went on to do her graduation from Chennai’s Anna University with a B.E. in Electronics and Communication Engineering. However, instead of choosing a career in Engineering, she became interested in Journalism and went on to pursue it as a full-time profession.

Sampath has her signature, long dark brown hair, along with Black eyes and an oval face. She has a pretty athletic build with a height of 5 feet and 3 inches and a weight of 53 kilograms.

Anitha comes from a humble Hindu household in Chennai. Her father’s name is Sampath. On August 26 in 2019, she got married in a small private ceremony to beau Prabha Garan. The couple had been dating for 3 years, after which they decided to tie the knot. The pictures of their marriage had gone viral on the internet, which is how her fans and the entire world found about the wedding. 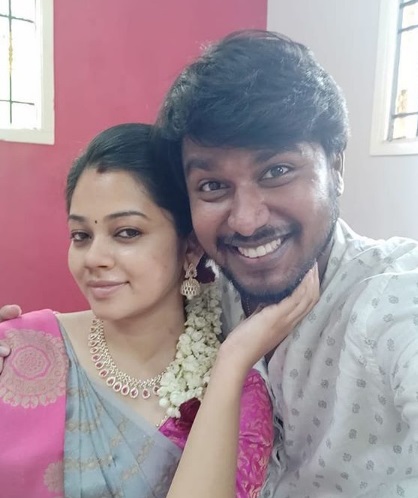 Anitha is a known Non-Vegetarian. In her leisure time, she often likes to dance her heart out. She also loves listening to music, but her absolute genre of music is Sufi, as she has mentioned in past interviews. Her athletic build is also a result of playing a variety of sports, out of which she loves Volleyball, the most.

Being in the news and media industry, She is very vocal about the on-going in the country and world, on her social media platforms. Anitha has an official Instagram account, where she has around 390 thousand followers. Her Instagram shows a glimpse of her life post marriage and all about the new endeavors that she has undertaken during the pandemic.

She also has about 20000 followers on Twitter. She often expresses her views and opinions on key matters there.

Anitha began her career by first joining as a news anchor in Polimer news and then News 7, which is also a Tamil news channel owned by the VV Group. Later she joined her current job at Sun TV, which made her a popular face in the TV news circuit. Along with her passion for news reporting, she has had several appearances in films and has also hosted a few shows. For more updates and information check Timesalert.

In 2017, Anitha was one of the hosts of Vanakkam Tamizha, a popular breakfast talk show which guests on its various segments of motivational talks, health tips, Yoga, meditation, and devotional songs to name a few. She was also a host for another Sun TV production, Vaanilai Arikkai news as well as another show called Hello Tamizha.

She has also had several cameos in hit movies over the years. In the 2018 hit movie Kaala, starring superstar Rajnikanth, the movie that was directed by Pa. Ranjith and produced by Dhanush had Anitha in the character of a News Reader.

However this year, Anitha had her breakthrough as the protagonist of a show. She was also a part of a Web Series called Emergency, streaming on Put Chutney’s YouTube channel. The medical drama revolves around the lives of 3 female doctors and their fight against invisible enemies – Virus, Bacteria, and Social Prejudice. Anitha plays one of the protagonists, Dr. Meera Krishnan. This is her first major acting breakthrough as the lead character. The show was released on 1 January 2021.

Season 4 of Bigg Boss Tamil is just around the corner and according to reports, Anitha Sampath will be seen inside the house as one of the contestants this year. Anitha will have to go head to head with around 20 other housemates to win the reality show hosted by Kamal Hasan.

Some Unknown Facts About Anitha Sampath