PUBG which has not completed its one year of release is the most ruling in gaming applications. It is a free game available for Android and also iOS systems. PUBG is compatible with low-end mobiles which are also a reason for its vast players. The game has brought life in the gaming applications with the graphics and gameplay.

PUBG is more popular among the youngsters and players are from that age group. But they are spending more time and ruining their academics. So, the game is blocked in few states of India by the government authorities. The PUBG 6 Hour Limit restriction has come into the picture to reduce the addiction of game.

PUBG has gone through many things which lead to banning the game. Though there is no official announcement of 6-hour limit we are getting a health remainder. As teenagers are more addicted and there are reports of causing death. So, the game has been banned for a few days in particular states of the country. The players are seeing a 6-hour limit restriction. They have arrested few members for playing PUBG in Rajkot, India after the ban. There is a recent incident where a youngster has lost his life for continuous playing of PUBG. So, the government made a limit to play the game for 6 hours per day.

To avoid the addictions by the people the authorities have made ways by keeping the limit of play. The Game verifies the time you have spent in playing and age of the player.  If you play the game for more than six hours a health disclaimer pop up arises. The pop says that “You’ve played the game for 6 hours today. Please come back on next day 5.30AM.” 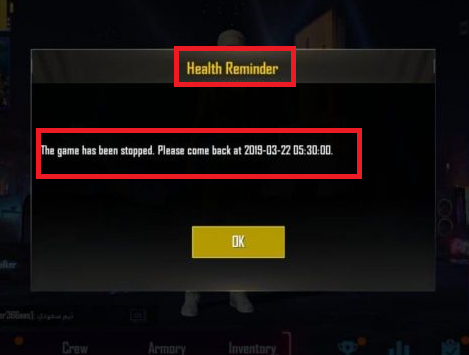 The App also verifies the age to know whether you are 18 years which will also set likes of play time of PUBG. Many users have tweeted about this pop-up and for now, it is only seen in India. This limit may also be implemented in other countries in future days. People now can also check more here for the Top Best Gaming Applications on both Android and IOS devices.

How To Avoid PUBG 6 Hour Limit

We can also create a new user account in the game and Avoid the six-hour limit. But playing the game for long hours of time is not a good thing. So, play it for fun and enjoy the gameplay.

We think this is a good move to avoid the bad incidents taking place because of the PUBG. The players will also know the time and effort to keep in playing a game. So, they can enjoy the game in a good way without any effects. For more Latest News and technology check Timesalert.